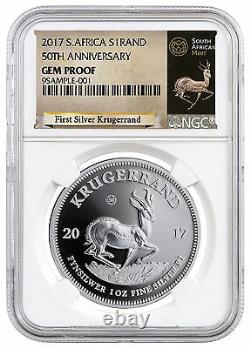 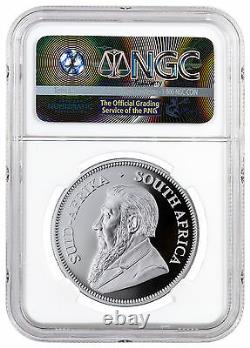 Many collectors around the world are familiar with the Gold Krugerrand from South Africa. Some of this is due to the fact that the Krugerrand was the first of the modern bullion coins, they were first issued by South Africa in 1967. To mark the 50th anniversary of this historic series, the South African Mint decided to offer something new, the world's first Silver Krugerrand.

However, the version shown here has a proof finish. Mintage of the proof is limited to just 15,000 pieces.

On both sides of this numismatic first the designs have been touched up by the South African Mint for the 50th anniversary. Both the obverse and reverse feature higher levels of detail than the originals. The obverse depicts South Africa's first President, Paul Kruger. These coins are named after him.

The reverse shows a springbok in stride. This is the national animal of South Africa.

It is finely detailed and a sprawling landscape can be seen in the background. A special privy mark was added for the anniversary, it is above the springbok's back. GEM Proof with an exclusive Krugerrand label. This coin was graded by the experts at the Numismatic Guaranty Corporation (NGC).

It received the grade of GEM Proof, which mean it looks like it just left the Mint. Its grade is printed on an exclusive Krugerrand label with the words FIRST SILVER KRUGERRAND.

Specifications for this 2017 South Africa 1 oz Silver Krugerrand Proof Coin NGC GEM Proof Exclusive Krugerrand Label SKU47955. We cannot make any price adjustments after the sale is complete. Product Photo Policy: MCM attempts to display product images shown on the site as accurately as possible. We take all of our photos in house and due to reflections on the mirrored or proof surfaces of a coin there may appear to be'black' when there is not. If a coin has a color on it at all it will be described as'colorized' in the description or title.

Due to the large inventory we sell, we use stock photos. Serial numbers will vary from the image shown unless specifically stated in the product listing that the item pictured is the item you will receive. INTERNATIONAL ORDERS POLICY: We are accepting international orders from select countries. These charges are the customer's responsibility. However, we cannot guarantee this due to the volume of orders we process each day.

Beyond the 30-day return period, Company is under no obligation to accept return of any product, but may in its discretion do so pursuant to this policy, for up to one year from the invoice date. ModernCoinMart (MCM) was launched in 2004 and quickly set the standards for online sales of bullion, US coins and world coins.

The item "2017 South Africa 1oz Silver Krugerrand 50th Anniversary NGC GEM Proof Exclusive" is in sale since Friday, June 23, 2017. This item is in the category "Coins & Paper Money\Bullion\Silver\Coins". The seller is "mcm" and is located in Sarasota, Florida. This item can be shipped worldwide.