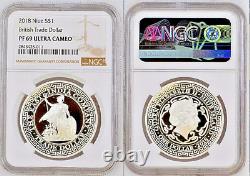 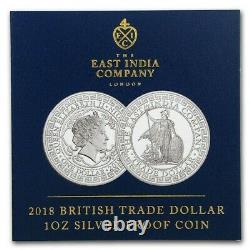 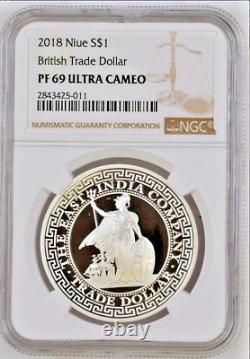 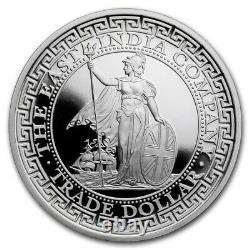 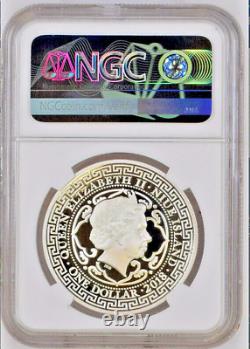 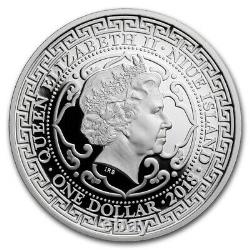 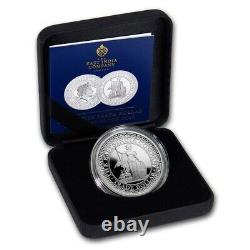 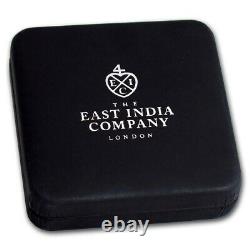 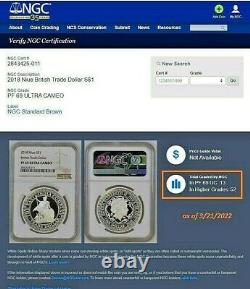 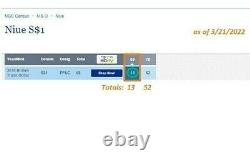 Design based on the early 1900s Silver Trade Dollars. The center of the coin features a standing helmeted Britannia looking to the left with her right hand grasping a trident and her left hand resting on an oval shield, bearing the united cross surrounded by the inscriptions "THE EAST INDIA COMPANY" and "TRADE DOLLAR". Reverse: Depicts the right-facing profile of Her Majesty Queen Elizabeth II, the year of issue and the face value. A Chinese scroll-pattern is also featured around the perimeter.

Max Mintage of 2,500. In 2018, the East India Company launched a remarkably well-produced new 5-coin series. This coin (Great Britain) is the 2nd coin of 5 in the Niue 5-coin Trade Dollar restrike series. (1) Great Britain (2) U.

(3) China (4) Japan (5) France. This coin (PF69 UC) is in the top 65 coins certified as >=PF69 UC by NGC worldwide a/o 3/21/2022. Coin, coin holder in perfect shape. The coin in the pictures NGC# 2843425-011. Other'stock' photos also used. See pictures for the advantages of the CoinArmour technology. Sovereign coin backed by the St. Additional Information below courtesy of APMEX, and other (public) web sites. 2018 Niue 1 oz Silver Proof British Trade Dollar Restrike. The East India Company was linked to the British empire.

This Silver Proof restrike is a historical coin with a classic design. It became necessary to produce a special dollar for trading in the British Colony when the price of Silver rose rapidly in value between 1875 and 1895. The Silver price disturbed trading and resulted in a very serious shortage of minted dollars. To overcome the threat of a currency famine, The Royal Prerogative of the English sovereign gave approval in 1894 for the minting of a special British Dollar for general use in Far Eastern Trade.

These coins were given an Eastern look to help ensure acceptance by countries outside of British dominion. To indicate that the coin was genuine, Chinese merchants would occasionally stamp the coins with a "chopmark" or "counterstamp" to indicate that the coin was genuine or perhaps to advertise their businesses. Chopmarks do not adversely affect the value of these coins in the secondary marketplace. Metal Content: 1 troy oz.