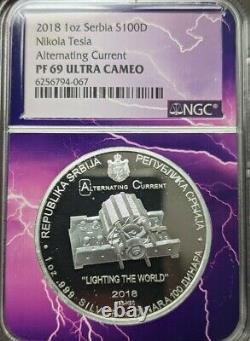 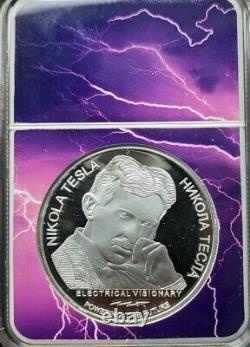 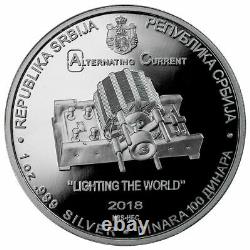 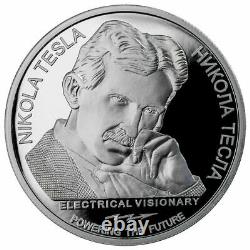 For some people, the mention of the name "Tesla" makes them think of the new electric car. For others it rekindles images of the heavy metal band from the late'80s and early'90s. For those of us who have actually picked up a book, it sparks memories of the brilliant scientist and inventor Nikola Tesla, whose many inventions and discoveries are still in use today making our lives better and brighter.

Now, on the 75th anniversary of his passing, the Serbian-born American is finally getting his due on a new series of coins released to commemorate the genius of Nikola Tesla. These legal-tender coins come in gorgeous Gem Proof condition and were struck in a full ounce of highly-pure 99.9% silver. They not feature not only the image of the scientific pioneer, but one of his greatest inventions-the alternating current (AC) induction motor. Considered one of the Top 10 discoveries of all time, it made its public debut at the 1893 World's Columbian Exposition in Chicago where it was used to dazzling effect to light the massive world's fair.

The motor is still the main power source for industry and household appliances today! You'd think with a résumé such as his that Tesla's name would be a household word. Discarded and forgotten, he died in 1943 alone and penniless in a New York City hotel. It wasn't until a 2017 episode of the hit CBS comedy "Big Bang Theory" that Tesla's name started to get its due among the general public. During the episode, the gang debates whether they are "Teslas, " who make their own discoveries, or "Edisons, " who build upon existing research. The spike in Google searches about Tesla was felt immediately. Tesla and his remarkable invention finally take center stage on this beautiful silver proof coin. History buffs, science aficionados and silver stackers alike are sure to appreciate the design and high silver content. Get one for yourself and several others for the budding scientists in your life.

Add them to your cart today! COMMEMORATIVE DESIGN OF ONE OF THE WORLD'S GREATEST INVENTORS. Though he made most of his discoveries after immigrating to the United States in 1884, Nikola Tesla was born in a region of Serbia that is now part of Croatia. The former Serb is commemorated on the obverse of the stunning silver coin released by the prestigious National Bank of Serbia. The coin's reverse features one of his most famous inventions - the alternating current (AC) induction motor, which today is still the main power for industry and household appliances.

It is considered one of the top 10 discoveries of all time. STRUCK IN HIGHLY PURE SILVER. These 2018 Serbia Nikola Tesla Alternating Current Silver Coins were struck in an ounce of highly pure 99.9% silver. Each Nikola Tesla One-Ounce Silver Coin is 100 Dinara legal tender in Serbia.

Your 2018 Serbia Nikola Tesla Alternating Current One-Ounce Silver Proof will come in Gorgeous Gem Proof condition, meaning it was expertly crafted by the mint from hand-selected planchets, polished dies and multiple strikes to produce beautifully frosted details rising over mirror-like fields! The Serbian Mint has set a maximum worldwide mintage for this coin at just 3,327.

Science enthusiasts, history buffs and silver stackers alike will all be vying to get their hands on this magnificent coin. Make sure you don't end up on the outside looking in, reserve one - or several - today! This item is in the category "Coins & Paper Money\Bullion\Silver\Coins".