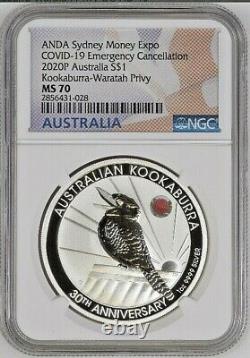 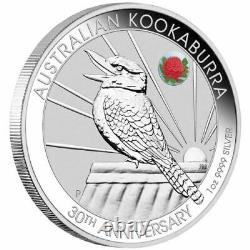 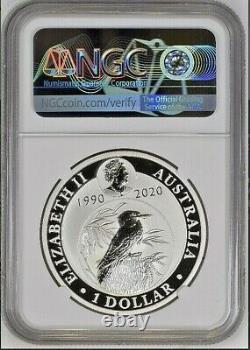 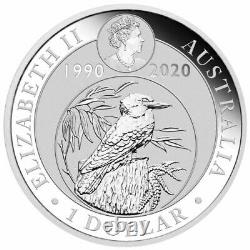 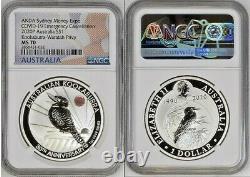 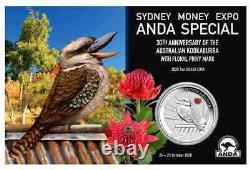 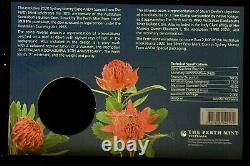 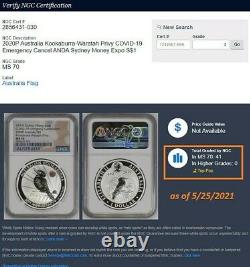 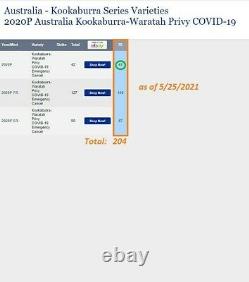 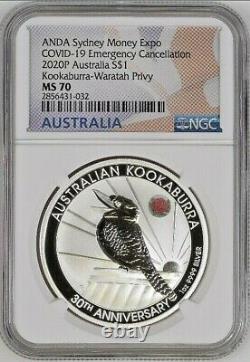 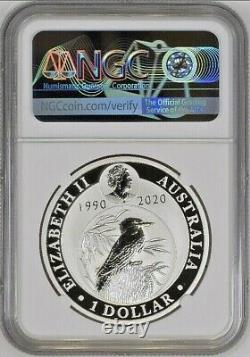 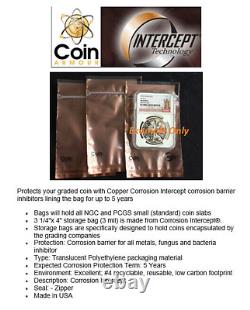 A Perth Mint'sell out'. Due to the CVID pandemic, all ANDA Expos/shows for 2020 had to be cancelled. These are really, really captivating coins.

2020 celebrates the 30t h year of issue. "30th ANNIVERSARY" is etched below center of the Kookaburra bird image. Jennifer McKenna created the reverse Kookaburra design. The bird stands perched on a rooftop singing one of its beautiful songs.

The rays of the morning sun in the background bring life to the image. This face also has a rim frame in which there are inscriptions.

"AUSTRALIAN KOOKABURRA" identifies the series at the top. The importance of this issue is noted at the bottom with the inscription 30TH ANNIVERSARY.

" To the right are inscriptions of the coin's weight and purity, "1 OZ 9999 SILVER, which are in smaller font. At the 7 o'clock position a'P' is stamped for the Perth Mint marking. This special anniversary obverse features the original Kookaburra design by Stuart Devlin (done 1990). Devlin shows the bird in right-side profile sitting on a tree stump. Above is a portrait of Queen Elizabeth II by Jody Clark.

The monarch has her Royal Diamond Diadem on her head and also wears earrings and a necklace. To the left and right of the portrait are the anniversary dates, "1990" and 2020. " A rim frame on this face offers the monarch's name, "ELIZABETH II, " and the coin's country, "AUSTRALIA" and face value, "1 DOLLAR. This Silver coin was struck by Australia's P erth Mint. I submitted several of these (ANDA - Kookaburras - with Floral Privy marks) coins to NGC for certification, and recently received them back from NGC on 4/15/2021 fresh, fresh, fresh!

The Original Government/ mint packaging is included - a very vibrant coin holder/ display card with georgeous images of a Kookaburra, and images of the Waratah flower. The coins shown in the pictures in the pictures NGC#. Other'stock' photos may also used.

Coins, holders, and packaging are all in PERFECT condition. See pictures for the advantages of the CoinArmour technology. Sovereign coin backed by the Australia government.

Note: If you are interested in purchasing the full 4-coin set of this issue (Melbourne, Perth, Sydney, Brisbane) please see my other listings. Additional Information below courtesy of public web sites. Share in the Perth Mint's celebration of the 30th anniversary of the Silver Kookaburra with this important anniversary issue. The coin was first issued in 1990 and has since captured the hearts of collectors from around the world. The series is popular thanks largely to its one-year only designs, which show the iconic bird in unique perspectives.

Each one was struck from 1 oz of. 9999 fine silver and bears the famous "P" mint mark of the Perth Mint in the lower left of the reverse. Striking Kookaburra Design by Jennifer McKenna. This special anniversary obverse features the original Kookaburra design by Stuart Devlin. The Perth Mint was established in 1899. Today it produces popular series, including the Kookaburra, Koala, and Kangaroo series. The coin features a Waratah privy mark, the New South Wales floral emblem, to signify the show that was due to take place in Sydney on the 24-25 of October 2020. The design depicts a representation of a kookaburra perched on a roof at dawn with stylised rays of light in the background. Also included in the design is a privy mark with a coloured representation of a Waratah, the inscription'AUSTRALIAN KOOKABURRA 30TH ANNIVERSARY', The Perth Mint's'P' mintmark, and the weight and purity. The obverse bears Stuart Devlin's depiction of a kookaburra on a tree stump surrounded by native foliage, as it appeared on The Perth Mint's 1990 Australian Kookaburra Silver Bullion Coin. Also included is the Jody Clark effigy of Her Majesty Queen Elizabeth II, the inscription'1990 2020', and the monetary denomination. The coin is presented in a coloured presentation card which incorporates a fold-out stand for upright display. Design features a Waratah privy mark, the New South Wales floral emblem.

Limited issue of only 2,000 coins. 30th year anniversary of the Australian Silver Kookaburra (1990 - 2020). This item is in the category "Coins & Paper Money\Coins: World\Australia & Oceania\Australia\Commemorative". The seller is "roblphilli" and is located in this country: US.