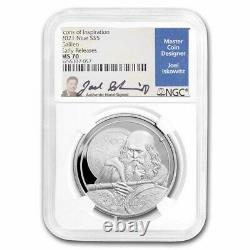 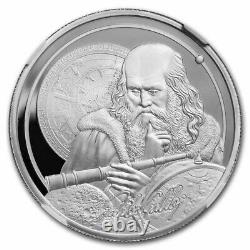 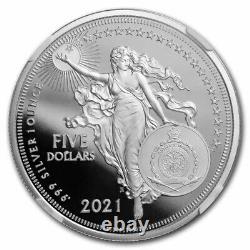 2021 Silver Icons of Inspiration: Galileo MS-70 NGC (Iskowitz) - SKU#233267. Photos in this listing may or may not be stock photos. The photos are meant to be an indication of the product you will receive. First release in a new APMEXclusive. Label hand signed by artist Joel Iskowitz, designer of the coin. NGC encapsulation protects and guarantees the coin's MS-70 condition. Obverse: Famed astronomer and physicist Galileo Galilei holding a refracting telescope, one of his most famous innovations, alongside a globe and the moon. A rendition of his signature is below. Coin designs created by famed coin designer Joel Iskowitz. This coin features an elegant design, paying homage to one of the most famous Icons of Inspiration of all time. Add this coin to your collection today! The first release in a new series of coins celebrating famous Icons of Inspiration through history features Galileo Galilei, one of the most famed innovators in scientific history.

Galileo's achievements and discoveries are fundamental to our present understanding of the physical universe. A scientist of many talents, Galileo is perhaps best known for his advancements in astronomy, especially the use of the refracting telescope to better understand the cosmos - including observations of the moon, supernovae, and our solar system, discovering the four largest moons of Jupiter, still referred to as the Galilean moons, and the phases of Venus. His observations led him to champion Copernicus's heliocentric view of the solar system, at the time controversial but now known to be factual. In addition to astronomy, Galileo achieved many other physical discoveries, including the laws of motion still fundamental to modern kinematics and a basic understanding of gravity based on the observation that bodies of unlike weights accelerate similarly in free fall.

His practical contributions included research on conic sections to develop more accurate artillery aiming, the development of a thermometer based on fluid dynamics, and refinements to the design of the refracting telescope. 1,359 Item as described. Rec'd item, looking forward to doing business with again.

This item is in the category "Coins & Paper Money\Bullion\Silver\Coins". The seller is "apmex" and is located in this country: US. This item can be shipped worldwide.