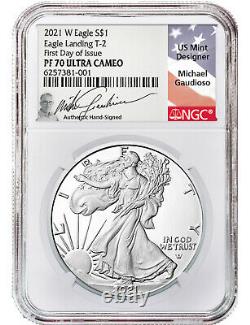 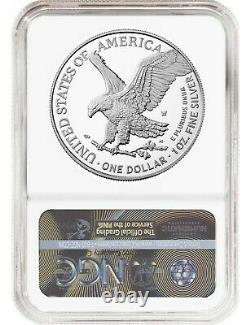 Mint is only going to only release 300,000 Proof Silver Eagles in July and just announced they are limiting these to 10 per household from 25. Only a fraction of those will be hand-signed by the prestigious engraver of the new Eagle Landing reverse Michael Gaudioso! Don't miss out on this coin in your collection, Pre-Order now. LCR Coin is excited to be offering this beautiful 2021 Silver Eagle Landing Type 2 First Day Of Issue NGC PF70 Ultra Cameo.

This coin is Hand Signed by Michael Gaudioso who sculpted the Coin. NGCs encapsulation guarantees the coins PF70 (perfect 70) condition. What makes this coin so special is this is the first year the U. Mint is using Emily Damstras design of her new Eagle Landing on the reverse of the silver eagle. The new Type-2 reverse depicts a beautifully detailed eagle in flight preparing to land, with a branch of oak clutched in its talons.

Since 1986 (for 36 years) the U. Mint has struck the same design for the beloved American Silver Eagle, until now.

Don't miss out on this important piece of American Silver Eagle history. Please note that this coin is a presale item. We are expecting these coins to arrive in Mid to Late August.

The American Silver Eagle is the official silver bullion coin of the United States first released November 24, 1986. American Silver eagles are only struck in the one-troy ounce size, which has a face value of one dollar and is guaranteed to contain one troy ounce of 99.9% pure silver.

Weinman designed the obverse known as The Walking Liberty and Emily Damstra designed the reverse. Michael Gaudioso is a graduate of the University of the Arts in Philadelphia. He earned his Master of Fine Arts from the New York Academy Graduate School of Figurative Art in New York City. From 1995 to 1999, he studied sculpture at the prestigious Repin Institute in St. He is a classically trained draftsman and sculptor and taught figure drawing at Villanova University. Prior to joining the United States Mints sculpting-engraving department in 2009, Gaudioso worked as a master painter and designer for Americas oldest and largest stained glass studio, Willet Hauser. He resides in South Philadelphia with his wife and daughter. 2011 First Spouse Gold Coin and Medal Program Lucretia Garfield reverse. 2011 Montford Point Marines Congressional Gold Medal obverse. 2008 Code Talkers Recognition Congressional Medals Program Ho-Chunk Nation obverse. 2008 Code Talkers Recognition Congressional Medals Program Oglala Sioux Tribe obverse.