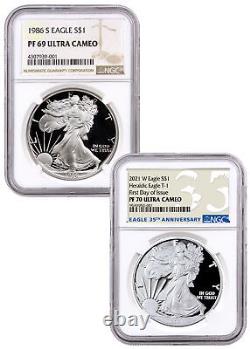 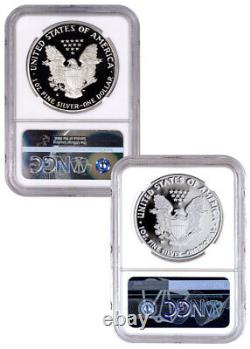 In mid-2021, to commemorate the 35th anniversary of the series, the first ever design change was implemented, concluding a chapter in the series' history. This beautiful pair of coins represents the beginning and end of the Type-1 variety Silver Eagle series. The silver dollars feature the iconic Type-1 imagery, minted thirty-five years apart.

This American Silver Eagle set includes the highly collectible first and last issue dates of the iconic Type-1 design. The 1986 coin was struck at the San Francisco Mint, while the 2021 coin is a West Point Mint product. Each coin is struck with an exquisite proof finish. The 40.60 mm diameter coins each contain 1 Troy oz.

Classic Type-1 American Silver Eagle Imagery. Obverse: Lady Liberty is illustrated walking towards the rising sun on the obverse, while draped in the folds of the American flag. In her arm she cradles a bundle of oak and laurel branches, which symbolize longevity, honor and triumph. Inscribed "LIBERTY, " "IN GOD WE TRUST" and the appropriate issue date of "1986" or 2021.

Coinage in 1916, on the Walking Liberty Half Dollar. Reverse: The reverse features an eagle positioned beneath thirteen stars, with a cluster of arrows and an olive branch in its grip. The Type-1 style Silver Eagle is primarily identified by this patriotic heraldic eagle graphic, which is credited to John Mercanti, the Mint's currently retired 12th Chief Engraver. The heraldic eagle image is surrounded by the inscriptions "UNITED STATES OF AMERICA, " 1 OZ.

Each component of this Type-1 American Silver Eagle 2-coin proof set was submitted to the Numismatic Guaranty Corporation (NGC) for review. Featuring a superior quality strike, nearly perfect surfaces and sensational eye appeal, the 1986 dated coin earned the virtually flawless grade of Proof 69. The 2021 dated coin was awarded the NGC's highest grade of Proof 70 Ultra Cameo (UC) for its impeccable strike, pristine surfaces and the remarkably high degree of contrast between its frosted and mirrored finishes. The 2021 coin was received by the grading service within twenty-four hours of its release date, qualifying for the prestigious First Day of Issue attribution.

San Francisco + West Point. We cannot make any price adjustments after the sale is complete. Product Photo Policy: MCM attempts to display product images shown on the site as accurately as possible. We take all of our photos in house and due to reflections on the mirrored or proof surfaces of a coin there may appear to be'black' when there is not.

If a coin has a color on it at all it will be described as'colorized' in the description or title. Due to the large inventory we sell, we use stock photos. Serial numbers will vary from the image shown unless specifically stated in the product listing that the item pictured is the item you will receive. INTERNATIONAL ORDERS POLICY: We are accepting international orders from select countries.

These charges are the customer's responsibility. However, we cannot guarantee this due to the volume of orders we process each day. Beyond the 30-day return period, Company is under no obligation to accept return of any product, but may in its discretion do so pursuant to this policy, for up to one year from the invoice date. ModernCoinMart (MCM) was launched in 2004 and quickly set the standards for online sales of bullion, US coins and world coins.

Join over 100,000 loyal customers and feel confident purchasing from a company that's spent a decade building a solid and stellar reputation trusted and recognized around the world. That's the MCM way.

The seller is "mcm" and is located in this country: US. This item can be shipped worldwide.