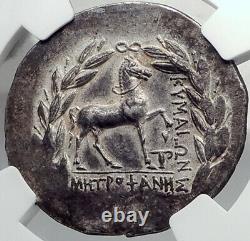 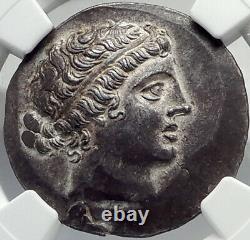 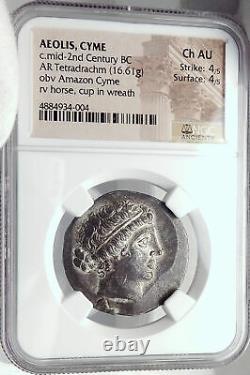 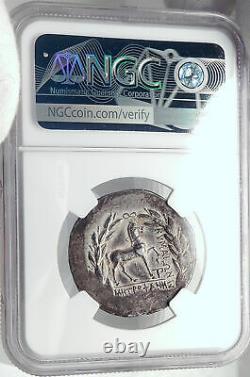 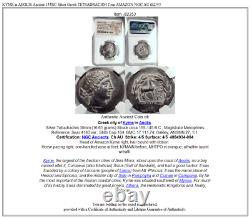 SNG Cop-104; BMC-17.111,74; Oakley, ANSMN 27, 1/1. Ch AU Strike: 4/5 Surface: 4/5 4884934-004 Head of Amazon Kyme right, hair bound with ribbon. Horse pacing right, one-handled vase at feet; KYMAIN before, MHTPO in exergue; all within laurel wreath. The largest of the Aeolian cities of Asia Minor, stood upon the coast of Aeolis. On a bay named after it, Cumaeus (also Elaiticus) Sinus (Gulf of Sandakli), and had a good harbor. It was founded by a colony of Locrians people of Lokris.

It was the name place of Hesiod and Ephorus, and the mother city of Side. By far the most important of the Aiolian coastal cities, Kyme was situated southwest of Myrina. For much of its history it was dominated by great powers, Athens. The Hellenistic Kingdoms and, finally, Rome.

The Amazons , also known as Oiorpata in Iranian and Scythian, were believed to have been a nation of all-female warriors in Greek mythology and Classical antiquity. Herodotus placed them in a region bordering Scythia in Sarmatia (modern territory of Ukraine).

Other historiographers place them in Anatolia, or sometimes Libya. Notable queens of the Amazons are Penthesilea, who participated in the Trojan War, and her sister Hippolyta, whose magical girdle, given to her by her father Ares, was the object of one of the labours of Hercules. Amazon warriors were often depicted in battle with Greek warriors in amazonomachies in classical art. The Amazons have become associated with many historical people throughout the Roman Empire period and Late Antiquity.

In Roman historiography, there are various accounts of Amazon raids in Asia Minor. From the Early Modern period, their name has become a term for female warriors in general. Amazons were said to have founded the cities and temples of Smyrna, Sinope, Cyme, Gryne, Ephesus, Pitania, Magnesia, Clete, Pygela, Latoreria and Amastris; according to legend the amazons also invented the cavalry. Kyme or Cyme (modern Turkish Nemrut Limani) was an Aeolian city in Aeolis (Asia Minor) close to the kingdom of Lydia. The Aeolians regarded Cyme as the largest and most important of their twelve cities, which were located on the coastline of Asia Minor. As a result of their direct access to the sea, unlike most non-landlocked settlements of the ancient world, trade is believed to have prospered. Archaeological finds such as coins give reference also to a river, believed to be that of the Hyllus. Both the author of the'life of Homer' and Strabo the ancient geographer, locate Cyme north of the Hermus river on the Asia Minor coastline, modern-day "Nemrut Liman"(in Turkish).

After crossing the Hyllus, the distance from Larissa to Cyme was 70 stadia, and from Cyme to Myrina was 40 stadia. Little is known about the foundation of the city to supplement the traditional founding legend.

Settlers from mainland Greece (most likely Euboea) migrated across the Aegean Sea during the Late Bronze Age as waves of Dorian-speaking invaders brought an end to the once mighty Mycenaean civilization some time around 1050 BC. During the Late Bronze Age and early Greek Dark Ages, the dialect of Cyme and the surrounding region of Aeolis, like that of neighboring island Lesbos, closely resembled the local dialect of Thessalia and Boetia in continental Greece. The colony was founded after the Trojan War by Greeks from Locris, central Greece, who began by reducing the Pelasgian citadel of Larisa near the river Hermus. Cyme prospered and developed into a regional metropolis and founded about thirty towns and settlements in Aeolis. Hesiod's father is said to have started his journey across the Aegean from Cyme.

The cities of southern Aeolis in the region surrounding Cyme occupied a good belt of land with rough mountains in the background, yet Cyme like other colonies along the coast did not trade with the native Anatolians further inland, who had occupied Asia Minor for thousands of years. Cyme consequently played no significant role in the history of western Asia Minor, prompting the historian Ephorus, himself a native of the city, to comment repeatedly in his narrative of Greek history that while the events he wrote about were taking place, his fellow Cymeans had for centuries sat idly by and kept the peace. Politically, Cyme is assumed to have started as a settler democracy following in the tradition of other established colonies in the region although Aristotle concluded that by the 7th and 6th centuries BC the once great democracies in the Greek world (including Cyme) evolved not from democracies to oligarchies as was the natural custom but from democracies to tyrannies. By the 5th century BC, Cyme was one of the 12 established Ionian colonies in Aeolis. Herodotus (4.138) mentions that one of the esteemed voters deciding whether or not to support Militiades the Athenian in his plan to liberate the Ionian Coast from Persian rule in (year BC) was Aristagoras of Cyme.

Aristagorus campaigned on the side of Histiaeus the Milesian with the tyrants Strattis of Chios, Aeaces of Samos and Laodamas of Phocaea in opposing such an initiative arguing instead that each tyrant along the Ionian Coast owed their position to Darius King of Persia and that liberating their own cities would encourage democracy over tyranny. Cyme eventually came under the control of the Persian Empire following the collapse of the Lydian Kingdom at the hands of Cyrus the Great. Herodotus is the principal source for this period in Greek history and has paid a great deal of attention to events taking place in Ionia and Aeolis. When Pactyes, the Lydian general, sought refuge in Cyme from the Persians the citizens were between a rock and a hard place. As Herodotus records, they consulted the Greek god Apollo (supporting the claim that they were of Ionic not eastern culture), who said after much confusion through an oracle that he should be handed over.

However, a native of Cyme questioned Apollo's word and went back to the oracle himself to confirm if indeed Apollo wanted the Cymians to surrender Pactyes. Not wanting to come to grief over the surrender of Pactyes, nor wanting the ill-effects of a Persian siege (confirms Cyme was a fortified city capable of self-defence) they avoided dealing with the Persians by simply sending him off to Mytilene on the island of Lesbos, not far from their city. In his Histories , Herodotus makes reference to Cyme (or Phriconis) as being one of the cities in which the rebel Lydian governor Pactyes sought refuge, following his attempted rebellion against the Persian King Cyrus the Great: c.

Pactyes, when he learnt that an army was already on his tracks and near, took fright and fled to Cyme, and Mazares the Mede marched to Sardis with a detachment of Cyrus' troops. Finding Pactyes and his supporters gone, the first thing he did was to compel the Lydians to carry out Cyrus' orders - as a result of which they altered from that moment their whole way of life; he then sent a demand to Cyme that Pactyes should be surrendered, and the men of the town decided to consult the oracle at Branchidae as to whether they should obey...

After the Persian naval defeat at Salamis, Xerxes moored the surviving ships at Cyme. Before 480 BC, Cyme had been the principle naval base for the Royal Fleet.

Later accounts of Cyme's involvement in the Ionian Revolt which triggered the Persian Wars confirm their allegiance to the Ionian Greek cause. During this time, Herodotus states that due to the size of the Persian army, Darius the Great was able to launch a devastating three-pronged attack on the Ionian cities. The third army which he sent north to take Sardis was under the command of his son-in-law Otanes who promptly captured Cyme and Clazomenae in the process.

However, later accounts reveal how Sandoces, the supposed Ionian governor of Cyme helped draft a fleet of fifteen ships for Xerxes I great expedition against mainland Greece c. Cyme is also believed to have been the port in which the Persian survivors of the Battle of Salamis wintered and lends considerable weight to the argument that Cyme was not only well served by defensive walls, but enjoyed the benefits of a large port capable of wintering and supplying a large wartime fleet. As a result, Cyme, like most Ionian cities at the time was a maritime power and a valuable asset to the Persian Empire.

Once Aristagoras of Miletus roused the Ionians to rebel against Darius, Cyme joined the insurrection. However, the revolts at Cyme were quelled once the city was recovered by the Persians.

Sandoces, the governor of Cyme at the time of Xerxes, commanded fifteen ships in the Persian military expedition against Greece (480 BC). Herodotus believes that Sandoces may have been a Greek.

After the Battle of Salamis, the remnants of Xerxes's fleet wintered at Cyme. Thucydides does not provide any significant mention of place is hardly more than mentioned in the history of Thucydides. Polybius records that Cyme obtained freedom from taxation following the defeat of Antiochus III, later being incorporated into Roman Asia province.

During the reign of Tiberius, the city suffered from a great earthquake, common in the Aegean. Other Roman sources such as Pliny the Elder mention Cyme as one of the cities of Aeolia which supports Herodotus' similar claim. The above-mentioned, then, are the twelve towns of the Ionians.

The Aeolic cities are the following:- Cyme, called also Phriconis, Larissa, Neonteichus, Temnus, Cilla, Notium, Aegiroessa, Pitane, Aegaeae, Myrina, and Gryneia. These are the eleven ancient cities of the Aeolians. Originally, indeed, they had twelve cities upon the mainland, like the Ionians, but the Ionians deprived them of Smyrna, one of the number.

The soil of Aeolis is better than that of Ionia, but the climate is less agreeable. It was assigned to the Roman province of Asia Prima. World-renowned expert numismatist, enthusiast, author and dealer in authentic ancient Greek, ancient Roman, ancient Byzantine, world coins & more. Ilya Zlobin is an independent individual who has a passion for coin collecting, research and understanding the importance of the historical context and significance all coins and objects represent.

Send me a message about this and I can update your invoice should you want this method. Getting your order to you, quickly and securely is a top priority and is taken seriously here. Great care is taken in packaging and mailing every item securely and quickly. What is a certificate of authenticity and what guarantees do you give that the item is authentic? You will be very happy with what you get with the COA; a professional presentation of the coin, with all of the relevant information and a picture of the coin you saw in the listing. Additionally, the coin is inside it's own protective coin flip (holder), with a 2x2 inch description of the coin matching the individual number on the COA. Whether your goal is to collect or give the item as a gift, coins presented like this could be more prized and valued higher than items that were not given such care and attention to. When should I leave feedback? Please don't leave any negative feedbacks, as it happens sometimes that people rush to leave feedback before letting sufficient time for their order to arrive.

The matter of fact is that any issues can be resolved, as reputation is most important to me. My goal is to provide superior products and quality of service.

How and where do I learn more about collecting ancient coins? Visit the "Guide on How to Use My Store". For on an overview about using my store, with additional information and links to all other parts of my store which may include educational information on topics you are looking for. The item "KYME in AEOLIS Ancient 155BC Silver Greek TETRADRACHM Coin AMAZON NGC AU i82353" is in sale since Saturday, February 8, 2020.