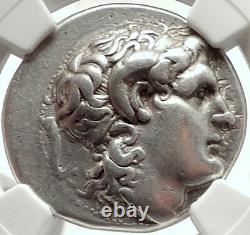 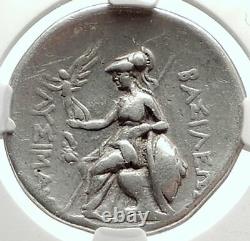 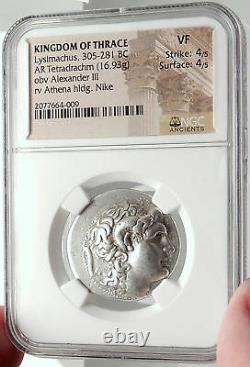 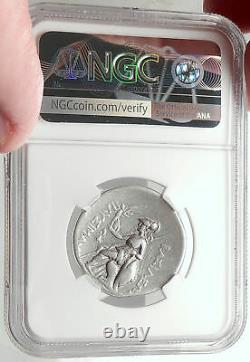 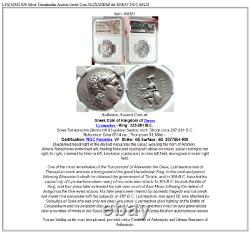 VF Strike: 4/5 Surface: 4/5 2077664-009 Diademed head right of the deified Alexander the Great, wearing the horn of Ammon. Athena Nikephoros enthroned left, holding Nike and resting left elbow on shield, spear resting to her right; to right, crowned by Nike to left; kerykeion (caduceus) in inner left field, monogram in outer right field. One of the most remarkable of the'Successors' of Alexander the Great, Lysimachos was of Thessalian stock and was a bodyguard of the great Macedonian King. In the confused period following Alexander's death he obtained the government of Thrace, and in 309 B. Founded his capital city of Lysimacheia where many of his coins were struck. He took the title of King, and four years later extended his rule over much of Asia Minor following the defeat of Antigonos the One-eyed at Ipos. His later years were marred by domestic tragedy and his harsh rule made him unpopular with his subjects.

Lysimachos, now aged 80, was attacked by Seleukos of Syria who was only two years his junior. Lysimachos died fighting at the Battle of Corupedium and his kingdom disappeared with him.

But his memory lived on and generations later a number of mints in the Black Sea area restored his coin types for their autonomous issues. Alexander III of Macedon (20/21 July 356 BC - 10/11 June 323 BC), commonly known as Alexander the Great , was a king (basileus) of the Ancient Greek kingdom of Macedon and a member of the Argead dynasty.

Born in Pella in 356 BC, Alexander succeeded his father, Philip II, to the throne at the age of twenty. He spent most of his ruling years on an unprecedented military campaign through Asia and northeast Africa, and by the age of thirty he had created one of the largest empires of the ancient world, stretching from Greece to northwestern India.

He was undefeated in battle and is widely considered one of history's most successful military commanders. During his youth, Alexander was tutored by the philosopher Aristotle until the age of 16. After Philip's assassination in 336 BC, Alexander succeeded his father to the throne and inherited a strong kingdom and an experienced army. Alexander was awarded the generalship of Greece and used this authority to launch his father's Panhellenic project to lead the Greeks in the conquest of Persia. In 334 BC, he invaded the Achaemenid Empire, and began a series of campaigns that lasted ten years.

Following the conquest of Asia Minor, Alexander broke the power of Persia in a series of decisive battles, most notably the battles of Issus and Gaugamela. He subsequently overthrew the Persian King Darius III and conquered the Achaemenid Empire in its entirety.

At that point, his empire stretched from the Adriatic Sea to the Indus River. Seeking to reach the "ends of the world and the Great Outer Sea", he invaded India in 326 BC, but eventually turned back at the demand of his homesick troops.

Alexander died in Babylon in 323 BC, the city he planned to establish as his capital, without executing a series of planned campaigns that would have begun with an invasion of Arabia. In the years following his death, a series of civil wars tore his empire apart, resulting in several states ruled by the Diadochi, Alexander's surviving generals and heirs. Alexander's legacy includes the cultural diffusion his conquests engendered, such as Greco-Buddhism.

He founded some twenty cities that bore his name, most notably Alexandria in Egypt. Alexander's settlement of Greek colonists and the resulting spread of Greek culture in the east resulted in a new Hellenistic civilization, aspects of which were still evident in the traditions of the Byzantine Empire in the mid-15th century and the presence of Greek speakers in central and far eastern Anatolia until the 1920s. Alexander became legendary as a classical hero in the mold of Achilles, and he features prominently in the history and mythic traditions of both Greek and non-Greek cultures. He became the measure against which military leaders compared themselves, and military academies throughout the world still teach his tactics.

He is often ranked among the most influential people in human history, along with his teacher Aristotle. 360 BC - 281 BC was a Macedonian officer and diadochus i. "Successor" of Alexander the Great, who became a basileus ("King") in 306 BC, ruling Thrace, Asia Minor and Macedon.

Lysimachus was born in 362/361 BC, to a family of Thessalian Greek stock. He was the second son of Agathocles and his wife; there is some indication in the historical sources that this wife was perhaps named Arsinoe, and that Lysimachus' paternal grandfather may have been called Alcimachus.

His father was a nobleman of high rank who was an intimate friend of Philip II of Macedon, who shared in Philip II's councils and became a favorite in the Argead court. Lysimachus and his brothers grew up with the status of Macedonians; all these brothers enjoyed with Lysimachus prominent positions in Alexander's circle and, like him, were educated at the Macedonian court in Pella. He was probably appointed Somatophylax during the reign of Philip II.

During Alexander's Persian campaigns, he was one of his immediate bodyguards. In 324 BC, in Susa, he was crowned in recognition for his actions in India. After Alexander's death in 323 BC, he was appointed to the government of Thrace as strategos. In 315 BC, he joined Cassander, Ptolemy I Soter and Seleucus I Nicator against Antigonus I Monophthalmus, who, however, diverted his attention by stirring up Thracian and Scythian tribes against him. In 309 BC, he founded Lysimachia in a commanding situation on the neck connecting the Chersonese with the mainland.

He followed the example of Antigonus I in taking the title of king. In 306/305 BC, he assumed the title of "King", which he held until his death at Corupedium in 282/1 BC.

In 302 BC, when the second affiance between Cassander, Ptolemy I and Seleucus I was made, Lysimachus, reinforced by troops from Cassander, entered Asia Minor, where he met with little resistance. On the approach of Antigonus I he retired into winter quarters near Heraclea, marrying its widowed queen Amastris, a Persian princess. Seleucus I joined him in 301 BC, and at the battle of Ipsus Antigonus I was defeated and slain. His dominions were divided among the victors. Lysimachus' share was Lydia, Ionia, Phrygia and the north coast of Asia Minor. Feeling that Seleucus I was becoming dangerously great, Lysimachus now allied himself with Ptolemy I, marrying his daughter Arsinoe II of Egypt. When Antigonus I's son Demetrius I renewed hostilities (297 BC), during his absence in Greece, Lysimachus seized his towns in Asia Minor, but in 294 BC concluded a peace whereby Demetrius I was recognized as ruler of Macedonia. He tried to carry his power beyond the Danube, but was defeated and taken prisoner by the Getae king Dromichaetes (Dromihete), who, however, set him free on amicable terms. Demetrius I subsequently threatened Thrace, but had to retire due to a sudden uprising in Boeotia, and an attack from the King Pyrrhus of Epirus. In 288 BC, Lysimachus and Pyrrhus in turn invaded Macedonia, and drove Demetrius I out of the country. Lysimachus left Pyrrhus in possession of Macedonia with the title of king for around seven months before Lysimachus invaded. For a short while the two ruled jointly but in 285 BC Lysimachus expelled Pyrrhus, seizing complete control for himself. Domestic troubles embittered the last years of Lysimachus' life.

Amastris had been murdered by her two sons; Lysimachus treacherously put them to death. On his return, Arsinoe II asked the gift of Heraclea, and he granted her request, though he had promised to free the city. In 284 BC Arsinoe II, desirous of gaining the succession for her sons in preference to Lysimachus' first child, Agathocles, intrigued against him with the help of Arsinoe II's paternal half-brother Ptolemy Keraunos; they accused him of conspiring with Seleucus I to seize the throne, and Agathocles was put to death. This atrocious deed of Lysimachus aroused great indignation.

Many of the cities of Asia Minor revolted, and his most trusted friends deserted him. The widow of Agathocles and their children fled to Seleucus I, who at once invaded the territory of Lysimachus in Asia. In 281 BC, Lysimachus crossed the Hellespont into Lydia and at the decisive Battle of Corupedium was killed. After some days his body was found on the field, protected from birds of prey by his faithful dog. Lysimachus' body was given over to another son Alexander, by whom it was interred at Lysimachia. World-renowned expert numismatist, enthusiast, author and dealer in authentic ancient Greek, ancient Roman, ancient Byzantine, world coins & more. Ilya Zlobin is an independent individual who has a passion for coin collecting, research and understanding the importance of the historical context and significance all coins and objects represent.

Send me a message about this and I can update your invoice should you want this method. Getting your order to you, quickly and securely is a top priority and is taken seriously here. Great care is taken in packaging and mailing every item securely and quickly.

What is a certificate of authenticity and what guarantees do you give that the item is authentic? You will be very happy with what you get with the COA; a professional presentation of the coin, with all of the relevant information and a picture of the coin you saw in the listing. Additionally, the coin is inside it's own protective coin flip (holder), with a 2x2 inch description of the coin matching the individual number on the COA.

Whether your goal is to collect or give the item as a gift, coins presented like this could be more prized and valued higher than items that were not given such care and attention to. When should I leave feedback? Please don't leave any negative feedbacks, as it happens sometimes that people rush to leave feedback before letting sufficient time for their order to arrive. The matter of fact is that any issues can be resolved, as reputation is most important to me.

My goal is to provide superior products and quality of service. How and where do I learn more about collecting ancient coins?

Visit the "Guide on How to Use My Store". For on an overview about using my store, with additional information and links to all other parts of my store which may include educational information on topics you are looking for. The item "LYSIMACHOS Silver Tetradrachm Ancient Greek Coin ALEXANDER the GREAT NGC i68281" is in sale since Wednesday, March 28, 2018. This item is in the category "Coins & Paper Money\Coins\ Ancient\Greek (450 BC-100 AD)". The seller is "highrating_lowprice" and is located in Rego Park, New York.