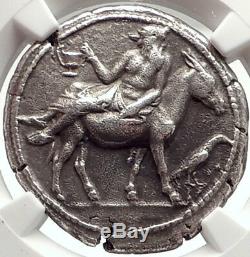 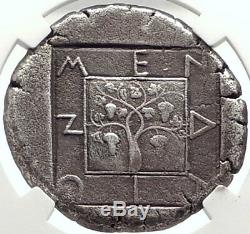 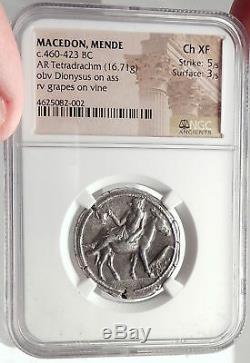 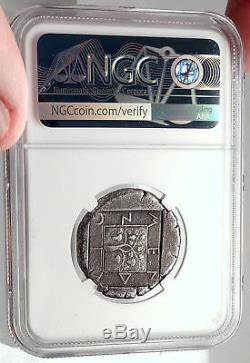 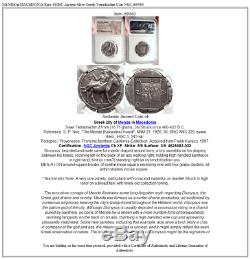 Acquired from Frank Kovacs, 1997. Ch XF Strike: 5/5 Surface: 3/5 4625082-002 Dionysus, bearded and nude save for mantle draped around loins, a tiny swastika on his drapery between his knees, reclining left on the back of an ass walking right, holding high-handled kantharos in right hand, bird a crow? Standing right on ivy tendril before ass.

MEN-A-I-ON around square border of central linear square enclosing vine with four grape clusters, all within shallow incuse square. Numismatic Note: A very rare variety, particularly with crow and swastika on mantle! Struck in high relief on a broad flan, with lovely old collection toning. The evocative coinage of Mende illustrates some long-forgotten myth regarding Dionysus, the Greek god of wine and revelry. Mende was famous as a center of wine production, as evidenced by numerous amphorae bearing the city's stamp found throughout the Hellenic world. Dionysus was the patron god of the city. Although Dionysus is usually depicted in procession riding in a chariot pulled by panthers, on coins of Mende he is shown with a more humble form of transportation, reclining languidly on the back on an ass, clutching a high-handled wine cup and appearing pleasantly inebriated.

Some rare varieties, including this example, also show a bird, likely a crow, in company of the god and ass; the meaning of this is unclear, and it might simply reflect the keen Greek observation of nature. The tiny swastika on the mantle of Dionysus might be the signature of this particular die engraver. Mende (Greek:) was an ancient Greek city located on the western coast of the Pallene peninsula in Chalkidiki, facing the coast of Pieria across the narrow Thermaic Gulf and near the modern town of Kalandra. Mende was probably built during the 9th century BC by Eretrian colonists.

The city owes its name to the minthe plant, a species of mint that still sprouts in the area. Mende's abundant lumber resources and possession of silver, gold and lead mines led to its rapid development.

From the 6th century BC, it was one of the cities that controlled trade routes along the coast of Thrace; there were even confirmed dealings with the Greek colonies in Italy, especially concerning the export of the famous local wine Mendaeos oinos. However, in 423 BC, it managed to revolt against Athenian rule, a situation that did not last long as the Athenians quickly suppressed the revolt Thuc. During the Peloponnesian War, Mende, Toroni and Skione were the main regional goals of the two combatants, Athens and Sparta, specially after Brasidas, the Spartan general, raised an army of allies and helots and went for the sources of Athenian power in north Greece in 424.

After the end of the war, Mende regained its independence. The city tried to avoid Olynthian rule in the 4th century BC, when the Chalkidician League was established; later it tried to avoid rule by the Macedonian hegemony, but in 315 its population, along with other Chalkidicians, was forced to resettle in Cassandreia, after this new city was built by king Cassander on the site of the former town of Poteidaea. The sculptor Paeonius, who made the statue of Nike that was put on top of the victory pillar in Olympia - and is shown in the Archaeological Museum of Olympia - was born in Mende. The location of Mende was identified with the area of the modern town of Kalandra by William Martin Leake in 1835.

Systematic excavational research was conducted from 1986 to 1994 by the XVI Ephorate of Classical Antiquities. The main archaeological area covers an area of 1200 by 600 meters and lies to the open and flat place of a hill by the sea. It was continuously inhabited from the 9th to the 4th century. The acropolis of the city is located to the south uppermost point of the hill, where large storage buildings among with pottery dated from the 11th to the 4th century, were found. The Proasteion (Suburb) of the city, which is also mentioned by Thucydides, occupied the waterfront area between the beach and the hill of the main city, where the harbour was located.

Excavations revealed part of the main avenue, paved with pebbles, along with foundations of buildings with storage pottery, possibly shops or harbour buildings. The settlement's Necropolis was found south of the city, near a modern hotel. Excavations were made in 241 tombs that mainly revealed burials of children inside engraved ceramic vases. Those excavations are considered important mainly because they proved that a heavy Euboean influenced settlement was established already from the 11th century.

World-renowned expert numismatist, enthusiast, author and dealer in authentic ancient Greek, ancient Roman, ancient Byzantine, world coins & more. Ilya Zlobin is an independent individual who has a passion for coin collecting, research and understanding the importance of the historical context and significance all coins and objects represent. Send me a message about this and I can update your invoice should you want this method. Getting your order to you, quickly and securely is a top priority and is taken seriously here. Great care is taken in packaging and mailing every item securely and quickly. What is a certificate of authenticity and what guarantees do you give that the item is authentic? You will be very happy with what you get with the COA; a professional presentation of the coin, with all of the relevant information and a picture of the coin you saw in the listing. Additionally, the coin is inside it's own protective coin flip (holder), with a 2x2 inch description of the coin matching the individual number on the COA. Whether your goal is to collect or give the item as a gift, coins presented like this could be more prized and valued higher than items that were not given such care and attention to. When should I leave feedback? Please don't leave any negative feedbacks, as it happens sometimes that people rush to leave feedback before letting sufficient time for their order to arrive. The matter of fact is that any issues can be resolved, as reputation is most important to me. My goal is to provide superior products and quality of service. How and where do I learn more about collecting ancient coins? Visit the Guide on How to Use My Store. For on an overview about using my store, with additional information and links to all other parts of my store which may include educational information on topics you are looking for.

The item "MENDE in MACEDONIA Rare 460BC Ancient Silver Greek Tetradrachm Coin NGC i69560" is in sale since Friday, May 11, 2018. This item is in the category "Coins & Paper Money\Coins\ Ancient\Greek (450 BC-100 AD)". The seller is "highrating_lowprice" and is located in Rego Park, New York. This item can be shipped worldwide.